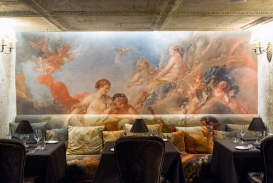 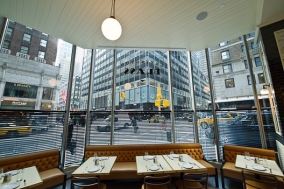 With their latest restaurant venture Lexington Brass, EMM Group breathes new life into the traditional midtown power lunch, abandoning the old school model of formal white tablecloths for a bustling, bistro-like experience better suited for the new wave of modern Manhattan diners. Stripped of pomp and circumstance, the Lexington Brass design is spacious but edgy, emoting an air of casual refinement. Full of plush seating and natural light, Lexington Brass features top notch service and a simple menu of bistro favorites that, for the weary traveler or overworked Manhattanite, will feel reminiscent of home. Unlike the blink-and-you-might-miss-it boites of lower Manhattan, Lexington Brass and its gleaming façade of floor-to-ceiling windows ushers in a new business backdrop where this generation of New York City minds and moguls break bread while breaking up the day, enjoying Lobster Mac n Cheese, Deviled Eggs, French Onion Soup, and Braised Short Ribs. 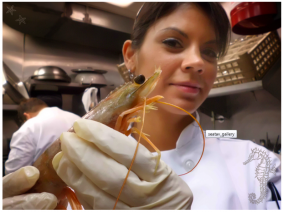 The Seahorse Tavern is bourne out of the life-long passions of neighborhood locals, who wanted to bring the cuisine they love—”comfort seafood”—to the people they love—family, friends, and, of course, neighbors. Their personal touches can be tasted on the menu; dishes using the freshest locally sourced seafood, create wonderfully inspired takes and many New England classics, such as fried oysters, Peeky-toe crab dip, and lobster rolls. The personal touches flourish as well with the decor; the bar and wainscotting are built from planks from the original Coney Island boardwalk, the lights and sconces were salvaged from big ships, the mirrors and artwork are antiques, and their signature seahorse is by Hamptons artist Drew Madden. The Seahorse Tavern hopes that its history with, knowledge of, and commitment to both comfort seafood and comforting patrons will draw in neighbors, old and new, and curious and hungry visitors for a long time. 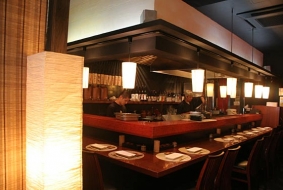 the menu extends beyond chicken kebabs, with noodles and soups, tofu skewers in a dark miso sauce, and a smattering of seafood.

Although yakitori means “grilled chicken” (usually on a stick), the time-honored working-class Japanese food that is the featured dish at this second-floor Midtown restaurant is taken beyond its usual place as street fare with the restaurant’s use of premium chicken. Seated at the bar or at a row of small tables in one of two dining rooms, the predominantly Japanese crowd favors its grilling done in the traditional manner (i.e., not cooked all the way through). If rare poultry makes you nervous and you don’t want to look like a timid American by ordering it well done, the menu extends beyond chicken kebabs, with noodles and soups, tofu skewers in a dark miso sauce, and a smattering of seafood. Most dishes seem designed for accompanying drinks, especially sojou and sake, which, for their part, can make negotiating the steep one-flight staircase down to the street something of an adventure as well. — Ethan Wolff
The TOWN Concierge is a complimentary service provided to all TOWN clients to make their real estate experience more pleasurable. Contact me for more information.